Skip to content
Home
/
One year into the innovation field trial 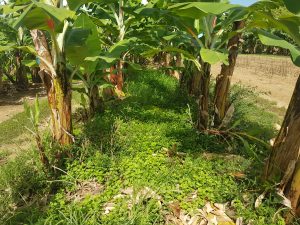 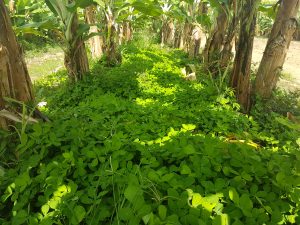 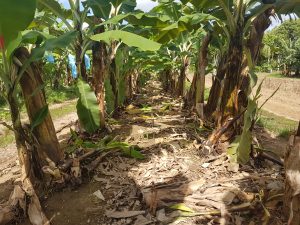 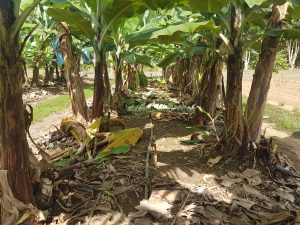 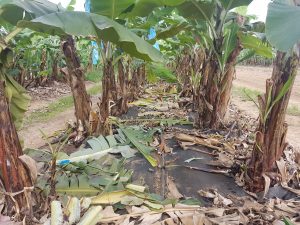 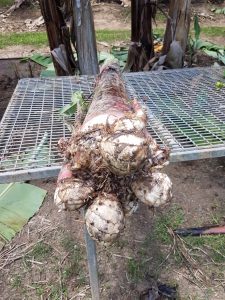 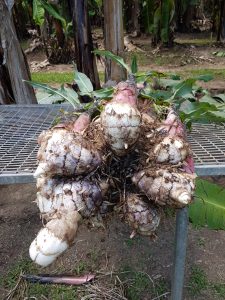 Early observations of an innovation field trial at South Johnstone indicates the weed matting has delayed bell emergence, and Pinto Peanut (Arachis pintoi) has shown to be the most promising living ground cover option.

As part of the industry’s National Banana Development and Extension Program, 390 Williams Cavendish banana plants have been subjected to different out of the box practices in which growers may not be willing to, or have the time to try on their own farms.

The Innovation trial was established in early November 2017, with tissue-cultured plants, planted in a double row configuration.

The first plants bunched in week 14, with the first week of harvest commencing in week 33. One year into the trial and the plant crop has reached 99.6% bunching and 92.5% harvest as of week 46. So far the Innovation trial consists of 5 different ground covers and two different de-suckering treatments.

The Pinto Peanut (Arachis pintoi) living ground cover is establishing well, with reduced crowding from other weed species, however, the mint (Mentha sp.) ground cover has more competition from weeds and isn’t establishing as well.

The weed matting is intact with significantly reduced growth of weeds. Unfortunately the chemical soil stabiliser (10% solution) is proving difficult to differentiate from the conventional bare soil treatment.

Weed growth and competition are managed in the chemical soil stabiliser and conventional bare treatments by the application of herbicide (glufosinate-ammonium).

The production characteristics from the different ground cover treatments will be analysed once the plant crop harvest is complete, however, initial observations indicate that the weed matting treatment seems to have slowed down the growth of the plants (bell emergence appears to have been delayed by between 3 – 7 weeks compared to the other ground cover treatments).

The delay in bell emergence may be a result of various factors including seasonal climatic conditions, increases in temperature due to the colour of the weed matting material and increased levels of mite damage.

With the aim of investigating whether timing of de-suckering for tissue-cultured plants in the plant crop has an effect on plant growth and vigour of the following ratoon crops, 50% of plants in the Innovation trial received an early de-suckering treatment.

For this treatment the first ‘flush’ of suckers were removed earlier than usual (approx. 3 months post planting), while the remaining 50% of plants received the first round of de-suckering closer to bell emergence. “Sacrificial” plants treated with these two de-suckering treatments were dug up at various time intervals to observe potential differences in sucker connection with the corm resulting from the 2 treatments.

Initial observations appeared to show a stronger sucker connection to the mother plant with the early de-suckering treatment compared to later de-suckering.

45 erosion pegs have been placed throughout the different ground cover treatments in the trial.

Measurements of these erosion pegs will soon be undertaken to investigate potential differences in sediment deposition and/or loss at different locations on the banana bed. If you have a small researchable idea you would like to see trialled please get in touch with the  extension team (07 4220 4152).