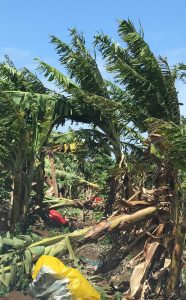 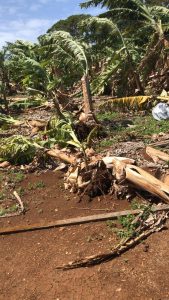 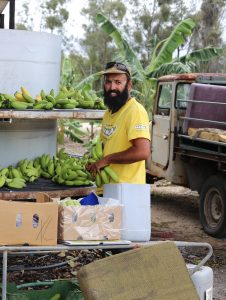 He’s the president of the Tweed BGA, always happy to show people around his farm, and keen to promote the industry in any way he can.

And it’s probably that love that will keep him going, despite being hit by two severe storms in three years.

Most recently, in late February, Colin and his family lost 95 per cent of their bananas to strong winds associated with Cyclone Oma.

While Oma didn’t make landfall, she could be felt along the Northern New South Wales and South East Queensland coast, with many growers bracing for damage.

However, while some other damage was recorded, it seems the Singh farm at Cudgen copped the brunt of this weather event.

“These sorts of things are supposed to make you stronger,” Colin said. “But you do wonder ‘why me?’

You can’t think too negatively though, because you’ll talk yourself out of doing it.”

Colin, who also works away from his farm, estimates he won’t harvest again until about this time in 2020.

“You’ve still got to pay your mortgage and your lease,” he said. “I was hoping I could build it [the banana business] up so I didn’t have to go away to work. Everything was looking really good this year.”

The winds, at about 80/km per hour, snapped thousands of stools, with bunches left lying on the ground.

“There wasn’t many bags left hanging, that’s for sure.”

The winds were so strong that some of the followers were also twisted. Thankfully some of the Singh’s other varieties – including plantains – were left standing, though they didn’t have as many of those planted.

Needless to say, Colin is hoping the next few years will be more favourable weather-wise, as he’s not sure how he’ll cope if another big storm takes out their crops.

“You put so much time, money and effort into it, but it’s a gamble,” he said.

“In some ways it’s like raising a kid – you can’t give it up, no matter how much you feel like throwing it in.”