The Lowdown: ABGC June Board Meeting

The ABGC Board met in Brisbane last week and discussed a range of significant issues facing industry. Among them were;

The board met with three senior representatives from the Department of Environment and Science (DES) to discuss serious grower concerns over proposed new Reef Regulations.

The board raised a number of issues including; nutrient and sediment provisions; restrictions on new developments; the inclusion of yield in the Nutrient Management Plan; leaf testing; and keeping invoices for fertiliser purchases for six years.

The ABGC board resolved to ask Plant Health Australia to pay off the remaining debt for the purchase of the first TR4 infested farm, including interest. This will be implemented by 30 June and will be funded from the banana PHA levy.

A Collaborative Agreement between ABGC and Biosecurity Queensland to both manage and fund the Panama TR4 Program into the future is progressing.

The agreement will be in place for four years and sets out a shared responsibility for funding, governance and delivery of the TR4 management program until June 30, 2023.

ABGC and BQ will be signatories to the Agreement and the governing Board responsible for the new Program will have 3 representatives from both organisations.

The aim of the program will continue to be to control and contain the spread of TR4.

The 2019 Australian Banana Industry Congress was successfully held at Royal Pines Resort on the Gold Coast from May 22-24.

This year’s event promised to be bigger and better and it did not disappoint. Feedback post-event has been extremely positive, with growers, sponsors and other delegates indicating that they enjoyed the two-day grower-focussed program, as well as the additional off-site tours and fantastic line-up of presenters and entertainment.

Total registrations surpassed last Congress and grower numbers were up by more than 20 per cent.

The Board heard that ABGC’s feral pig management effort in the high risk TR4 zone in the Tully Valley had eradicated 4096 pigs to end May, since it began in July 2017.

ABGC director Leon Collins who has helped co-ordinate the program with professional shooter Trevor Williamson said he was extremely happy with the program’s continued success.

The majority of the 4000 figure has been through ABGC’s aerial shooting program, however pigs have also been controlled through concerted grower actions on-farm, including ground shooting, baiting and trapping. 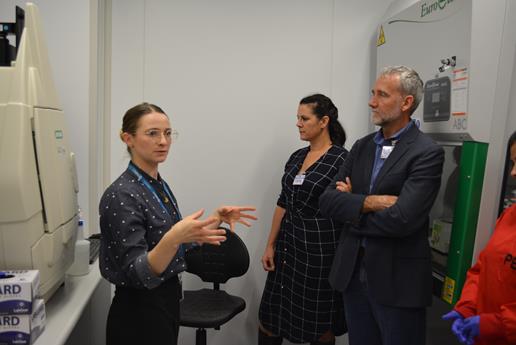 Directors Stephen Lowe and Jade Buchanan, along with ABGC staff, were given a fascinating insight into the Panama TR4 testing process during a tour of the Eco Science Precinct in Brisbane.

A big thank you to Dr Juliane Henderson, Manager, Plant Biosecurity Laboratory and Elizabeth Czislowski, Senior Scientist, Panama TR4 Program, who gave up their time to talk through the important work happening on site.

Opportunities for NSW and SEQ growers

The Coffs Harbour BGA is bringing growers to visit the Duranbah subtropical variety evaluation trial site on Friday July 5 and welcomes all growers from the Richmond, Brunswick, Tweed and SEQ along as well.

The day will kick off at 10am and include a look at some of the ‘best bet’ varieties, which are currently bunching. Lunch will be provided so RSVP is essential for catering. Please email Leanne Davis at leanne.davis@dpi.nsw.gov.au by this Friday June 28.

As part of BA16007, the subtropical development and extension project, there’s funding allocation for up to 10 subtropical NextGen growers from NSW or SEQ to travel to North Queensland.

The trip will be limited to 10 growers and include the QDAF research trials and biosecurity protocols at South Johnstone, the Tully Show banana weigh-in plus other, as-yet-to-be-decided sites and events.

·         Participants must pay for food and drinks, as well as contribute to a presentation for their respective BGA, an article in Australian Bananas magazine and the final project report. You’ll also need to get yourself to and from Gold Coast Airport (early morning departure on July 24.)

The project hopes to take a few growers from each region. If you’re interested contact Matt Weinert on matt.weinert@dpi.nsw.gov.au or 0438 644 136.

Travelling off-farm is often an unavoidable part of day-to-day business – and most growers do so with care for both biosecurity and the environment.

It is the responsibility of all involved in the industry to be mindful of leaving waste on public roads, including string, banana bags and mud.

Non-biodegradable waste – like bags and string – has the potential to end up in waterways, while transferring mud on public roads and between properties can easily spread disease.

Essentially – if you have to use public roads, please handle waste with care and keep your rubbish on board!

Supermarket funding up for grabs

Woolworths has just announced the second round of its Organic Growth Fund. Growers can apply for the Fund if wanting to convert to organic from conventional production or if wanting to expand organic production. It provides interest free loans and grants, as well as contracted purchase volumes. Closing date 22 July. Details here.

The latest round of the Coles Nurture Fund has just opened, with funding of up to $500,000 available. The funding is for producers, farmers and manufacturers to advance innovation in their businesses – essentially, doing something in a new and different way, with value for you and those receiving your product. Applications for this round close August 30. Details here. 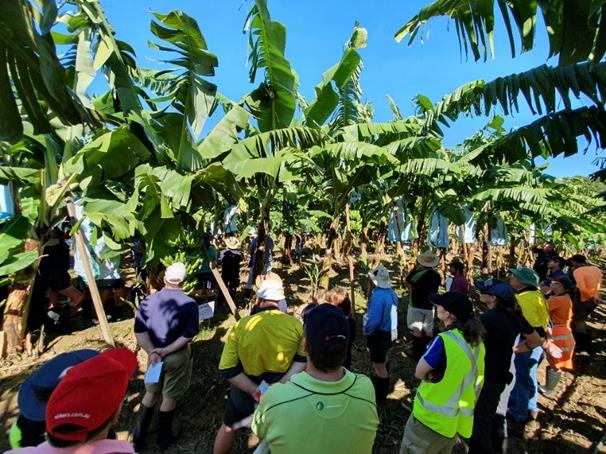 More than 50 people attended a field walk at the South Johnstone Research Station last Friday, with participants intrigued by the variation in the plant crop bunches of the different varieties being trialled.

Jeff Daniells, who gave a guided tour of the 32 varieties said, “growers were interested in the origin, agronomic observations and also the disease resistance of the varieties”.

Taste buds were tantalised with a selection of varieties on offer to try, and growers also had the chance to view new nutrient rate trials, which are trying to find the optimal range of nitrogen rates, taking into consideration agronomic and environmental factors.

If you missed this field walk there will be more opportunities to see the trials as they progress.

For more information about the trials at the South Johnstone research station, contact the better bananas team – betterbananas@daf.qld.gov.au