By Jeff Daniells and Carole Wright, Queensland Department of Agriculture and Fisheries

Several TR4 resistant varieties are amongst the new varieties being assessed for agronomic performance at the South Johnstone Research Facility. The growers who attended the June 2019 field walk at South Johnstone saw many of the varieties as they were approaching harvest in the plant crop. The results of that first crop are presented here.

The agronomic evaluation at South Johnstone has been proceeding well and quickly since it
was planted with tissue culture plantlets on 26 September 2018. Bunch harvest commenced in mid-May 2019 for the early varieties and continued through until the end of the calendar year for the slower selections. Data for most of the varieties is presented in the table on the opposite page.

This trial is a first look at many of the varieties.
So far we only have data for a plant crop in north Queensland, and the number of plants of each variety in the trial is quite modest. It is also important to appreciate when comparing varieties harvested early with the much later ones, that part of the difference occurring may be due to the time of year when the bunch happens to be filling.

Once revised material transfer agreements are in place with those organizations that developed the varieties then some of the better performing ones can be advanced to the on-farm trial stage which will include greater numbers of plants than are possible at South Johnstone.

We have included all of the Cavendish selections from Taiwan present in Australia in this trial. All of the Taiwanese Cavendish selections were from two to five months slower than Williams in the first crop but several had heavier bunches. When one considers the bunch weight relative to the time taken, two of the new selections in the table – Asia Pacific #3 and GCTCV 217 had comparable yields to Williams, as did the two Formosana (GCTCV 218) selections which is very encouraging. The other Taiwanese varieties yielded from 77 to 94% compared to that of Williams in the plant crop. Some had significantly shorter fruit, as indicated by the percentage of fruit in the 22-26 cm size class, and several, but not all, of the Taiwanese varieties were taller plants than Williams.

All four selections from Rahan Meristem – Gal, Jaffa, Adi 9001 and Adi 9168 had heavy bunches
of long fruit as well as good hand separation in the bunch, which should help minimise fingertip scarring. Notably Gal and Jaffa were the only varieties in the trial with significantly higher yield (per unit of time) than Williams. We have not tested these selections against TR4 but they are not expected to have any resistance. These selections are owned in Australia by Rahan Meristem and are expected to be made available to a few selected growers for on-farm evaluations towards the end of 2020.

The dwarf selections of Cavendish – Brier and Dwarf Cavendish have yielded well, being comparable to Williams but with shorter fruit, particularly in the case of Dwarf Cavendish. Yields of the CIRAD hybrids ranged from 52 to 58% of that of Williams. They were 12 to 46% taller than Williams in the plant crop and their leaf petioles seemed quite brittle, often snapping under strong wind. Fruit of the four CIRAD hybrids have been tasted by staff at South Johnstone – CIRAD’s 03 & 05 were particularly liked whilst 04 and 06 were unusually fragrant. A repeat evaluation in the future for a few varieties in the trial with true-to-type plants is required because of a high incidence of tissue culture offtypes.

Where to from here?

The first ratoon harvest is already underway with some of the early varieties commencing harvest in January 2020. The trial will continue for two ratoon crops collecting agronomic information followed by leaf spot screening in ratoon 3. 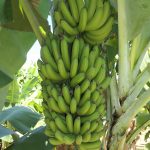 The Taiwanese Cavendish selection – GCTCV217 yielded as well as Williams in the plant. 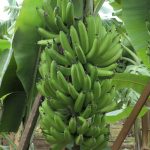 Plant crop bunch of Gal. Both Gal and Jaffa had significantly higher yield per unit of time compared to Williams. 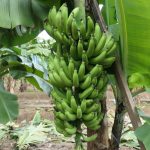 Brier and Dwarf Cavendish are both dwarf plants that yielded well but the former had significantly more fruit in the 22-26cm category. 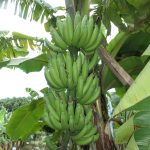 CIRAD 05 was good-tasting but yielded only 56% of Williams was 12% taller than Williams. 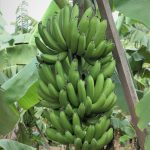 GCTV 215 had greater TR4 resistance than Formosana in the NT screening trial but yielded about 20% less in this South Johnstone trial. 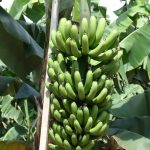 Formosana Selection took 3.5 months longer than Williams from planting to harvest but its heavier bunch weight made up for it.