The Australian Banana Growers’ Council has set up a new landing page for you to access the latest news on worker shortages affecting the banana industry – and Australian agriculture more broadly.

In the most recent update, the Queensland Department of Agriculture and Fisheries has confirmed to the ABGC that 30 per cent of the 774 SWP and PLS workers who have quarantined so far have been recruited to work on banana farms.

While this number will fluctuate, this is a positive outcome for industry during what continues to be an incredibly challenging time.

The ABGC, and indeed all agricultural industries, have continued to advocate for an overall increase in the number of workers permitted to fly to Australia and for practical quarantine options to be available upon their arrival.

The ABGC is working closely with authorities and will keep growers updated on outcomes as they come to hand.

The new workforce issues landing page will also include: 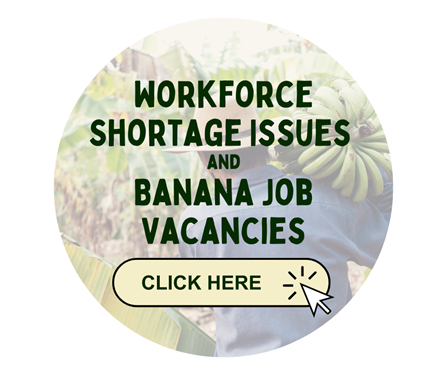 The ABGC has also published another promotional video, aimed encouraging young locals looking for work to check out positions available on banana farms (directing them to the Banana Jobs Noticeboard.) With thanks to Matt Abbott and his team for giving up their time.

The ABGC is aware that some growers are now making the tough decision to destroy crops due to the workforce shortages.

If you do, please consider reporting your losses to the National Lost Crop Register.

This is an initiative designed to capture the devastating impact the shortages are having and is used to help illustrate this to the media, broader public and decision makers. As at February 8, the Register had recorded more than $45m in losses.

You can find the link on the new ABGC page mentioned above, or simply click here to go straight to the form.

ABGC directors and senior staff met for their quarterly Board meeting via videoconference last week.

Worker shortages were again a major topic of discussion at the meeting along with other significant industry issues.

The ABGC is continuing to do everything possible to consult with growers and advocate for positive outcomes for industry, particularly when it comes to the Pacific Labour Scheme (PLS) and Seasonal Worker Program (SWP).

Any new developments will be communicated to growers via the new Workplace Shortage Issue webpage on our website, as well as through e-bulletins and SMS.

Addressing worker shortage issues is, and continues to be, the main priority of the ABGC.

Two senior members from the Office of the Great Barrier Reef (OGBR) attended the board meeting via video link to hear industry concerns over new regulations that will affect new or expanded horticulture activities on land that doesn’t have a cropping history.

In December, the OGBR released a new consultation draft for the regulations and sought feedback at meetings across all reef catchments over the past month, including Lakeland, Innisfail, Tully and Mareeba.

The ABGC has lodged a written submission to the OGBR as part of the consultation process. As part of this submission, it has sought exemption from the regulations for farming land in Cape York and also for those growers who want to establish new farms and have Freshcare Environmental accreditation.

The new QBAN scheme – run by industry, for industry – is now in operation. The new scheme was 10 years in the making and resulted from the successful transition from a Biosecurity Queensland run program, to now being jointly administered and resourced by Greenlife Industries Australia (GIA) and the ABGC.

Growers can look forward to receiving quality planting material produced under QBAN which sets the standards and the protocols expected by industry and will be correctly labelled, vigorous, uniform and disease-free and successfully distributed to growers.

A list of all QBAN accredited businesses is available directly from ABGC and will be published in each issue of Australia Bananas magazine.

Despite continued uncertainly over COVID, planning for Congress 2021 remains on track, with the ABGC confident of hosting a successful, COVID safe event in Cairns from May 12-14.

Registrations opened on February 12 with the Early Bird rate and ‘Win Your Way to Congress’ competition open until Monday, 15 March. More on this later in the e-bulletin.

Representatives from Transport for NSW will present the Panama Disease Control Management Plan (relating to the Coffs Harbour Bypass) tomorrow.

The presentation will be held on Wednesday February 24, at Coffs Harbour Showground – Norm Jordan Function Room from 5pm-6pm. Tea and coffee provided.

If you’re keen to be part of a NextGen grower group in Coffs Harbour/Nambucca or the Northern Rivers region, share your thoughts on how you’d like it to run at one of two upcoming meetings.

·      Park Beach Bowls Club, Coffs Harbour – February 25 (this Thursday), 5pm. Places are limited so please RSVP via the details below.

The meetings will also be an opportunity to suggest activities, training, workshops and field trips. RSVP to NSW DPI Industry Development Officer Tom Flanagan on 0437654633 or email him on tom.flanagan@dpi.nsw.gov.au.

Free workshops are planned for growers in the Tweed and Coffs Harbour areas to help interpret the results of soil and tissue nutrient tests.

The workshops will be hosted by banana nutrition expert Dr John Armour and aim to improve understanding of these monitoring tools to help with fertilizer management.

RSVP is not essential but would be appreciated. Contact Tom Flanagan via 0437 654 633 or tom.flanagan@dpi.nsw.gov.au. View the full event flyer here.

Protecting your farm at the gate might be easier than you think. Get in the zone with these banana growers who started with small jobs like a few steel pickets, string, a foot bath and some signs. Watch their stories at www.panamatr4protect.com.au or view the latest video here.

Register early to Win Your Way to Congress!

As mentioned earlier in this e-bulletin, Early Bird registrations for Banana Congress 2021 are now open! Join us in Cairns for a jam-packed event, filled with practical and inspirational speakers. You’ll also get the chance to hear from Outback Croc Wrangler Matt Wright at the 2021 Banana Ball.

If you are a grower and register before March 15, you won’t just save up to $115, you will also go into the draw to win back the cost of registration, accommodation and up to $500 travel expenses. The lucky winner will be drawn after the Early Bird period ends.

ABGC grower members are also eligible to receive a discounted Congress rate. Simply provide your unique Grower Member Code. If you’ve not received your code, you can contact Hilary Opray via Hilary.Opray@abgc.org.au or 07 3278 4786.

The Congress Management Team is mindful of COVID-19 and will take all necessary precautions to ensure a safe event. You can also read our detailed cancellation and postponement policies here. 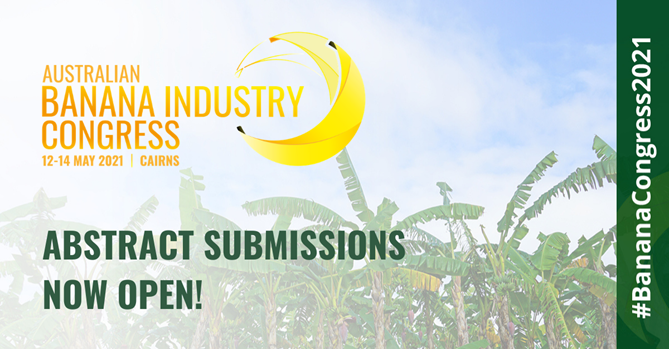 A highlight of each Banana Congress, researchers again have an exciting opportunity to present their science as either three-minute speed talks or display posters targeted to the audience of growers and industry stakeholders. These are the future adopters and end-users of technology developed by scientists.