Skip to content
Home
/
Rick-roaring recollections of years gone by The name Lachie Rick will be familiar to many in the banana industry, as a former grower, long-time director and ABGC chairman. He invited Amy Spear to his Mission Beach home to share some of his memories.

More than six decades ago, Lachie Rick’s father told him it was about time he started paying rates on the family’s banana farm.

“Better yet,” a young Lachie replied, “why don’t I buy it from you?”

Lachie ended up with a fourth, splitting the property equally with two other brothers and father to form S Rick & Sons.

Growing since he was just 15, Lachie would go on to play a vital role in the industry and serve on the Australian Banana Growers’ Council in various roles for more than 15 years.

“When you planted and got a good crop, it was a real pleasure.”

The work, as any grower would tell you, was never easy.

On top of the tough physical requirements, growers in North Queensland contend with severe Tropical Cyclones—Lachie remembers Winifred (1986) and Joy (1990) as two of the worst while he was growing bananas—as well as ongoing price fluctuations.

In fact, in 1957, poor prices meant a number of growers—including Lachie—went to work at the plymill during the week, while maintaining bananas on the weekend.

It was at the plymill that he met Lyn and, in 1963, they married and returned to bananas full-time, living on the farm.

He was soon asked to stand for the Banana Sectional Group Committee and, though he was defeated the first time, he began working with them looking into imports.

Successful in his second attempt to join the board, Lachie’s first official meeting was in 1973 and involved the National Banana Marketing Development Scheme.

“The idea was that growers paid a levy and any unwanted fruit—no matter the quality—we took off the market to avoid a big backlog.

“At that meeting the NSW growers wanted to up the minimum price and, when Queensland didn’t agree, they all got up and walked out!”

Now, Lachie believes that one of the greatest achievements during his time on the board was improving relationships with growers across Australia.

Lachie served on the Sectional Group for 16 years, while also representing Queensland on the national body.

For his efforts, he received an award of honour from the ABGC and, for broader services to the community, an Order of Australia Medal.

While there was plenty of hard work involved in representing the industry, there’s no doubt the board knew how to have fun.

In among a few late nights and many trips away, Lachie recalled one Valentine’s Day meeting, when a staff member carrying a single red rose entered the room.

He put his head in his hands, hoping it wasn’t for him.

But, of course, Lyn had found the perfect way to deliver a cheeky message in front of fellow board members.

Lachie Rick resigned from all committees in 1992 and acknowledged that the industry has changed a ‘hell of a lot’ since then—mostly for the better.

“When my father started growing, people were growing in among the stumps and logs. It was hard work.

“You’d fell a block, leave it for about three months, then put a fire through and do what we’d call a ‘rough log up.’

Then you would cut a track down the middle of a block and carry bunches out either side of the track out to the truck.

“Then the bulldozers came in and we were able to get rid of the stumps and logs.”

Lachie’s youngest brother, Charlie, designed the A-Frame trailer that would be taken up industry wide.

“It cut out one man. When you had the box trailers, you had to have someone in the trailer to take the bunch off you—this design ruled that out.”

Although he never patented the design, within a couple of years it was being used across Queensland and in WA and NSW.

His other brother, Frank, who was managing a farm towards ElArish, grew a world record bunch weighing 236 pounds and four ounces (about 107 kilograms).

“That farm grew bunches from 150 pounds up to the record weight,” Mr Rick recalled. “They had to put in an electric winch as the workers couldn’t lift them.

“Of course, that record has been taken off us a few times since. And they don’t really go for it anymore—there’s still big bunches at shows, but nothing like what people used to produce.”

Lachie admits that it is a tough time for those still working in the industry, particularly in light of Panama TR4.

Despite the challenges facing the industry, Lachie remained confident about the future.

“I do think the banana industry is one of the best for researching and keeping up-to-date.” 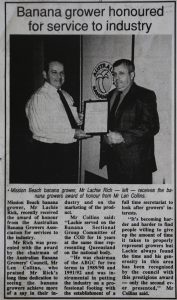 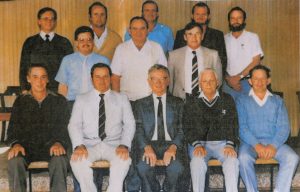 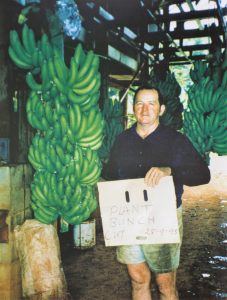