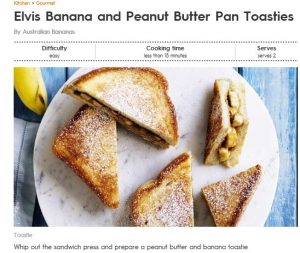 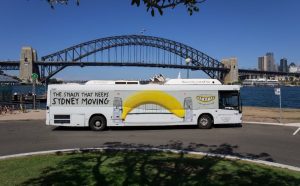 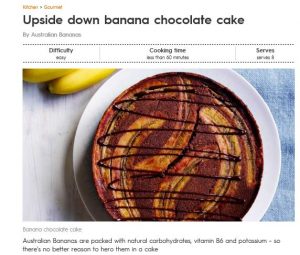 Australian Bananas continues to reach consumers in innovative, exciting ways – using both new and traditional media to target their audience.

Hort Innovation is responsible for investing the banana marketing levy into a range of activities to drive frequency of purchase and consumption, under the Hort Innovation Banana Fund.

The 2017/18 marketing program was bursting with activity.

The program focussed on getting our target markets to snack on bananas more frequently – in particular, people aged 25 to 39 and families with kids 12 years and under.

It involved a number of activities, from advertising and traditional media outreach, to a strong social media program and participation in community events.

During 2017/18 a range of advertising channels were used, with a goal of increasing the frequency at which Australian consumers purchase bananas.

The activity building on the successful theme of ‘Nature’s non-stop energy snack’.

The Australian Bananas TV campaign aired in two bursts during the financial period – during August and September 2017, again during March and April 2018. The ads retained the iconic ‘Make Your Body Sing’ jingle and showed a fast-moving montage of people powering through their day thanks to an energy burst from bananas.

Activity took place across all major capital cities and in key regional markets, across major free-to-air networks and also on pay TV.

Driving awareness of the campaign and frequency of messaging to remind consumers about bananas, the out-of-home campaign involved Australian Bananas advertising on bus panels during September to October 2017, and between March and April 2018, across five capital cities.

Digital Australian Bananas advertising was run across desktop, tablet and mobile phone devices at various stages from August to November 2017, and then again from mid-March to May 2018.

We employed a number of digital strategies for this Bananas campaign, ranging from Programmatic Video (automated video advertising based on our specifications), Coles Fly Buys Signal Data, Woolworths data through Quantium, YouTube Bumper ads as well as Snapchat.

There were three components, including:

Video ads (excluding Youtube) were served to more than 7.4 million people during the financial year with a strong result of, on average, 77.89 per cent of all people watching the ad through to completion.

The activity involved 15 second Australian Bananas ads delivered across some of the most-visited websites in market, including the catch-up TV services of channels Seven, Nine and Ten.

There were particular strategies around targeting sports and time targeting of news sites to ensure the ads would appear when the highest number of people were on these sites during the day.

This was used to extend our reach via YouTube cost effectively.

This is a new non-skippable format with a variety of creative options. Our Bumper Ads ran with age demographic targeting across each video. In total, 6 videos ran for the duration of the campaign.

The best performing piece of creative was the 100% delicious which had an overall completion rate of 84.81%.

Using Quantium and Coles Flybuys data (which gives insights into shoppers) we were able to target lapsed/lapsing and New/Active banana buyers through Woolworths and Coles sales data with the aim of changing buying behaviour and ensuring a sales uplift in both segments.

Overall the campaign using Quantium data, saw an uplift in sales of $200.1k which amounts to an extra 4.73% resulting in a Return on Ad spend of $2.93 (for every dollar spent on the platform).

The best performing segments were our Banana Lovers (New and Active), these had a higher propensity to purchase more bananas during the campaign period.

While the trend of active users making the bulk of purchases remains consistent, the results of lapsed and lapsing audience are quite different to the campaign run with Coles data as a larger purchase uplift came from the lapsed and lapsing group (Graph 1 and Graph 2).

Throughout the year, the consumer-facing website www.australianbananas.com.au remained a hub for recipes and banana facts, as well as health and nutrition information.

The website remains the number-one result in Google for the search term ‘bananas’.

Growers (via a log-in) can also gain access to monthly marketing updates and research reports through the site.

The industry’s ‘always on’ approach to social media also continued during 2017/18 as an important channel for keeping bananas top of mind. Across Facebook (www.facebook.com/AustralianBananas) and Instagram (@australianbananas), the social media program delivered content and messaging around core content themes including bananas as a fun fruit; bananas as a source of energy/nutrition; and bananas as ‘a-peeling snacks’; plus there was content on the growers behind the produce.

During 2017/18, the marketing program continued to promote the health benefits of Australian bananas on a national stage through product sampling, promotion and supply of merchandise at various sporting and community events around the country.

Events included the Weet-Bix Kids TRYathlon 2017/18 series, which had nearly 13,756 participants and 27,198 spectators to cheer on competitors. Two new events were added to 2017/18 – the Western Sydney Marathon and MS Walk Fun Run.

These two events had in total 6,207 participants.

Other events from the financial period that saw promotion and sampling of bananas included Ride2Work, with eight events held in October across all states. Ride2Work is Australia’s largest celebration of commuter riding and promotes the benefits of riding to work.

Australian bananas were handed out at breakfast activations in each state to refuel riders on their way to work.

Other events that Australian Bananas participated in were the Fleurieu Fondo Festival held in South Australia and the JP Morgan Corporate Challenge held in Sydney in November.

Australian Bananas continued sponsorship of community events held in growing regions around the country, including the Innisfail, Tully and Atherton Shows, the Banana Industry Race Day in Innisfail, the Nambucca Banana Hurl, and various sporting clubs in Queensland, New South Wales and Victoria.

More than 3000 pieces of Australian Bananas merchandise were handed out at these events.

The Melbourne Market Authority Schools Program reached over 20,000 people over the year-long duration of their program, while over 2000 students were involved in the Foodbank WA program.

These sponsorships were a great way to educate children about fresh fruit and bananas specifically, building consumers for today and into the future.

Taking banana messaging to the Australian media, the Australian Bananas public relations (PR) strategy for 2017/18 had a focus on young families and people aged 25-39.

It was designed to encourage this audience to snack on the fruit more frequently.

Activities included the distribution of banana tips and recipes to media, plus interviews and the production and distribution of content with Australian Bananas ambassador Susie Burrell.

Susie is one of Australia’s leading dietitians and runs her own healthy eating blog.

As well as media activities, she posted regularly about bananas to her website and social media channels during 2017/18 with content including banana recipes produced for the campaign, reaching more than 9.8 million people.

The Bounty New Mother bags, as the name suggests, are designed for women with newborns and distributed through hospitals nationally by midwives and Bounty representatives.

204,000 Australian Bananas banana cases were included in the bags during 2017/18. Inside the banana case there is a leaflet detailing the benefits of bananas as both a baby’s first food and an ideal snack for busy mothers.

Overall there’s been an enormous amount of activity for Australia’s most consumed fruit! And the advertising is definitely resonating.

2018/19 marks the first year in a three-year marketing plan for the banana industry.

The last three-year campaign was strong, with Nielsen data showing 91.6% of Australian Families purchasing bananas (Nielsen Homescan, MAT to 19/05/2018) and maintaining a leading position in both the snack and energy snack categories.