Skip to content
Home
/
Here’s looking at you, growers

What does the latest round of benchmarking reveal about the banana industry? The 2016/17 results are in and Howard Hall, of Pinnacle Agribusiness, is here to help break them down.

It’s clear banana growers aren’t afraid of a bit of hard work – and know how to do things efficiently.

Over the past seven years, Australian banana production has increased by 34 per cent, with yield up by more than 40 per cent nationally, according to growers who participated in the banana industry benchmarking program.

However, that strong work ethic may well be out of need as much as passion, with operating costs up 7 per cent and – confirming what many growers already know – cash profit down.

In fact, cash profit has decreased overall by 56 per cent among participants.

The figures come as a result of the latest banana benchmarking, conducted by Howard Hall of Pinnacle Agribusiness.

WHAT THE ‘TOP 10’ DO DIFFERENTLY

On average per 15kg:

His latest data, gathered during 2016/17, shows labour productivity has also increased by 21 per cent.

With operating costs up and cash profit down, Mr Hall said the data shows the industry is no longer sustainably profitable for many growers.

But, as he points out, this is not as dire as it sounds.

“Many industries have been in this position before – apples, tomatoes, citrus and potatoes just to name a few,” he said.

“What they did successfully, and what the banana industry needs to do, is improve and diversify the supermarket offering.”

Mr Hall explained that in the late 1990s, field grown ‘Gourmet’ tomatoes were the Cavendish of the banana category.

Now, there are numerous options for consumers to choose from.

“And this doesn’t have to solely be about varieties – it could be changes to marketing, merchandising and packaging a well.” 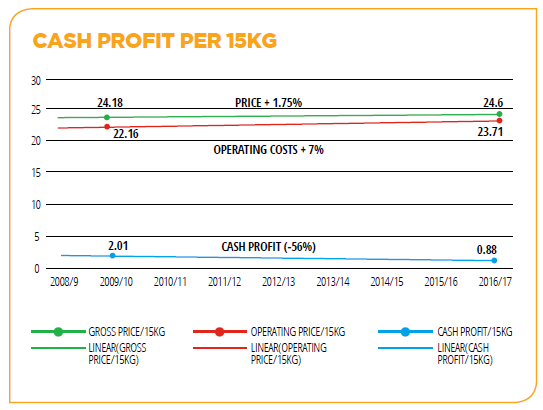 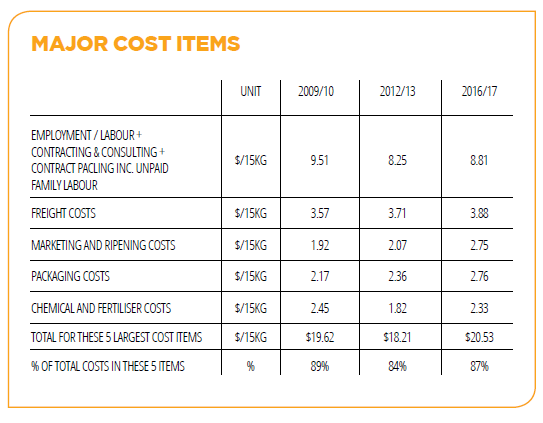 The benchmarking data, based on a sample of growers that represent roughly 30 per cent of industry volume, takes in all varieties and growing regions across Australia.

It is gathered with the assistance of volunteer growers so, while it takes in both small and large operations, may represent a more active portion of the industry.

On top of overall insights into how the industry is performing, it also looks at particular issues like biosecurity and environmental management.

The data shows 97 per cent of participating growers use footbaths or a shoe exchange, but this doesn’t take into account how effective each grower’s set-up is.

64 per cent of growers have partially fenced their property and 28 per cent have full fencing, though some is not necessarily pig-proof. 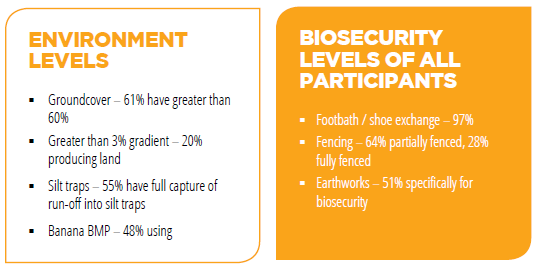 Since the initial detection of TR4 in North Queensland, participating growers have spent an average of $1600 per producing hectare on ‘New Capital Items’.

Mr Hall suggested a new approach at industry level may assist to maximise the value, to the industry, of new biosecurity investment.

When it comes to the bottom line, Mr Hall has identified two real options to improve production economics.

“The first is to reduce the cost of production. This could be through labour management and efficiency, continued yield improvement or freight, packaging, marketing and so on,” he said.

“The second option is to increase the value of the product on the market.”

Mr Hall, who has been presenting his findings as part of the National Banana Roadshow, said he hopes the latest benchmarking can provide some  valuable key messages.

“The reality is that, of those top 5 costs, only one is really in a manager’s control: labour.”

“If you’re having trouble with profitability, the best thing you can prioritise is process reengineering – basically you need to look at how you can improve those labour costs.”

This project has been funded by Horticulture Innovation Australia with fund from the banana levy and funds from the Australian Government.