A win for banana marketing 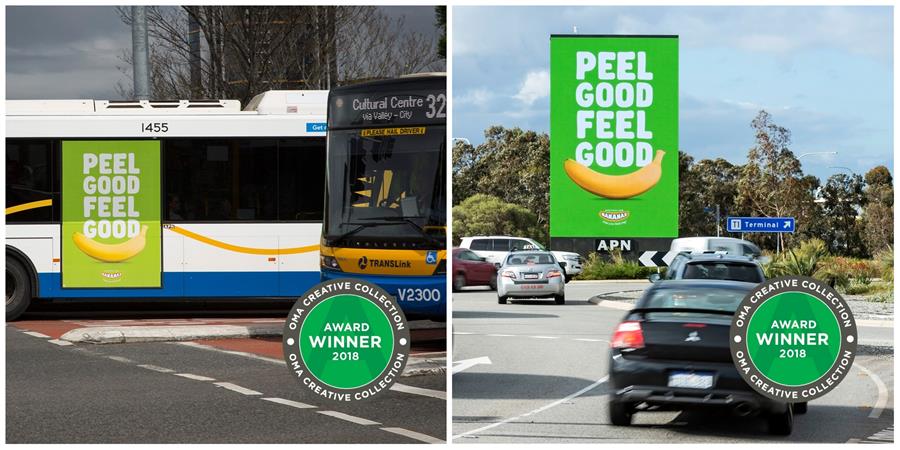 Australian Bananas marketing, funded by Hort Innovation with grower levies, has won an award from the Outdoor Media Association.

The OMA’s Creative Collection competition recognises the best Out Of Home (OOH) campaigns each quarter.

Australia Bananas won the OMA award for the ‘Best traditional use of OOH’ with their first ‘Peel Good, Feel Good’ campaign – which you can see in the images above. Congratulations to the team!

A brand new edition of Australian Bananas magazine will be hitting your letterbox soon.

In this edition, you can expect to find features on diversifying the business, the Five-Year Control and Containment strategy for TR4, an update on the fight against feral pigs and a sneak peak of Congress 2019.

There’s also plenty of research – including on varieties and the banana microbiome – and the latest social pictures and events. Enjoy!

The banana industry’s best and brightest working behind the scenes gathered in Cairns recently for the Banana Scientific Symposium.

Almost 30 speakers addressed representatives from government, universities and industry on topics ranging from soil and varieties to Panama TR4.

The event was held in Cairns from November 27-28 and organised by Queensland DAF.

Voting members of Hort Innovation elected three new board directors at their recent Annual General Meeting. This increased its board’s female representation to four out of nine directors, including newly elected director, Julie Bird.  Susan Finger and Stephen Lynch were re-elected to serve another term. The current chair, Mr Selwyn Snell, was reappointed to serve another term at a subsequent board meeting.

The other notable outcome of the AGM was that a Special Resolution seeking to allow Industry Representative Bodies to become eligible voting members of Hort Innovation was not passed. It narrowly failed to receive the required 75% of votes in favour.

Michelle McKinlay, Industry Strategy Manager, recently represented the banana industry at a number of meetings convened by Plant Health Australia (PHA), of which ABGC is a member.

·         A decision to review a number of provisions of the Emergency Plant Pest Response Deed (EPPRD). These include the definition of roles and responsibilities that are part of each party’s “normal commitment” to an emergency response and confidentiality arrangements that apply to communications during an emergency response.

·         Discussion about the possibility of a national property identification code for plant industries (similar to what currently exists in animal industries). PHA will convene working groups to consider changes to the current provisions and report back to members in May 2019. For more information please contact Michelle McKinlay on 07 32784786.

The Federal Government has agreed to all recommendations made in an independent review of the Intergovernmental Agreement on Biosecurity (IGAB) – which has a mandate to strengthen Australia’s national biosecurity system.

Peak horticulture body, the Voice of Horticulture (VOH) has welcomed the news, saying the review of the IGAB also represented a commitment by all governments to build a stronger national biosecurity system to meet any new challenges and protect Australia’s farming future.

VOH’s Tania Chapman said that by endorsing the 42 recommendations of the review, the Federal Minister for Agriculture, has also made a commitment that the Government will strengthen the IGAB system over the next five to 10 years.

Don’t be left in the dark about Panama TR4

Every two months Biosecurity Queensland email a Panama TR4 update to keep you abreast of the latest TR4 news. Are you getting it?

Don’t be left in the dark, being up to date may help you prepare and protect your farm from this serious disease.

Have your say on ending the Freckle Levy

ABGC has proposed to the Australian Government that it reduce the Emergency Plant Pest (Freckle) levy from 0.75c/kg to zero, as at 1 July 2019.

The debt relating to the National Banana Freckle Eradication Program is expected to be paid off by 1 July 2019, or shortly thereafter. Any small remaining debt is to be paid by the Plant Health Australia levy.

For your input, objections or to ask any questions please phone or email ABGC CEO Jim Pekin at jim.pekin@abgc.org.au or 07 3278 4786. You can also send objections to the Dept. of Agriculture and Water Resources via response.policy@agriculture.gov.au.

The registration website for the 2019 Australian Banana Industry Congress will launch very soon.

You’ll hear from us as soon as you can jump online, but needless to say there is a fantastic, diverse program waiting for you – and some very good deals if you get in early! Stay tuned.