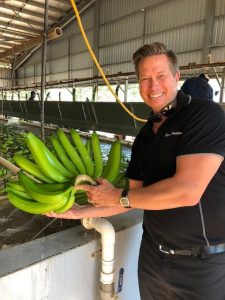 Paul Vievers (pictured) and Peter Lahey have worked in the business together for years. 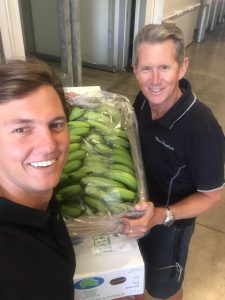 Peter’s son Adam joined the business three years ago, marking the third generation of his family to do so.

Peter Lahey is ‘bananas’ for sailing, bike riding and, of course, his banana business.

The keen cyclist can often be found with a banana in hand after a long weekend ride – and sharing it across social media.

“Bananas fit well with my lifestyle so I always like to take a banana selfie in all the different locations I cycle to,” he said, naming Springbook’s Best of All Lookout as one of his favourites.

Mr Lahey has worked in bananas since 1988, joining the family business established in 1975 by his father-in-law Errol White and Wayne Veivers – South Queensland Banana Ripeners.

“They started out with a very small facility and one Bedford truck, before moving up to a one thousand square metre warehouse and ripening facility.” Paul Vievers, Wayne Vievers’ son, came on board shortly after Mr Lahey and both remain committed to the company to this day.

It’s fair to say a lot has changed in their 30 plus years working together. In the late 1980s, a large part of their trade was direct supply into supermarkets and independent fruiterers from the south side of Brisbane through to the New South Wales border.

“In 2005, we built a new 2200 square metre state-of-the-art ripening facility to accommodate the greater expectations of our customers and the need for the latest ripening and storage technology,” Mr Lahey explained.

“At about this time, the major chain stores were also moving into large, modern distribution centres and Paul and I could see that the way we had been doing business with the chains would change.”

Mr Lahey said he and Mr Vievers had been happy with the big supermarkets representing about 85 per cent of their business, but the position began to feel untenable with the introduction of dealing directly with growers.

“In 2007, we purchased a selling floor section in the Brisbane Markets and started Viva Produce with the view to substantially open up our customer base.”

You’ll still find the pair on the floor at Brisbane Markets more than 10 years later. “The central market is alive and well, and I encourage all growers to visit from time to time and see their product in a saleable state,” he said.

By any standard, working closely with the same person for decades could be considered a challenge – but it’s not the case for this partnership.

“Since taking over the business in the early 1990s, we’ve always managed a good relationship – even though we are quite different in personality and build!”

Mr Lahey recalled one instance on the way home from a suppliers meeting where a stop at a club for a ‘couple of beers’ turned into ‘quite a few’.

“As anyone who knows us would agree, Paul is a lot bigger than me. When we left the club, we accidentally picked up each other’s suit coats. A week later, I was told Paul’s wife was having a blue with the dry cleaner for getting his coat mixed up.”

Three years ago, Mr Lahey’s son Adam joined the business – the third generation to do so.

And while the future is looking strong for the company and broader industry, it’s not without its challenges.

“The cost of doing business is progressively squeezing margins,” explained Peter. “Being in a supply and demand industry with occasional long periods of oversupply and low prices does not stack up against the rising costs of everything from electricity to insurance, wages and fuel.”

“The one expense we should have a say in is regulator costs like food safety. I want our product to be safe for the consumer, but the bar seems to be continually lifted to unnecessary heights.”

Despite this, it’s a passion for the industry that keeps Peter and his team going day after day.

“After 31 years in the industry, people often ask what gets me out of bed every day. I love the challenges this industry throws at us. I’m very passionate about bananas and the people we deal with.”