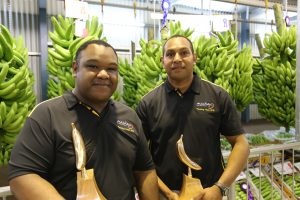 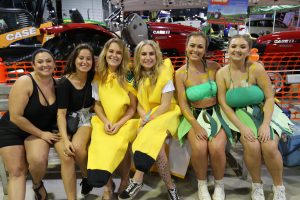 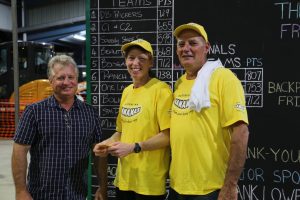 The Australian Banana Packing Championship was back after a year’s hiatus, putting professionals and willing backpackers to the test. Amy Spear was at the Innisfail Showgrounds to check out the action.

For many growers and farm workers, packing box-upon-box of quality bananas is part of the daily grind.

It’s a source of pride and – ultimately – what the consumer gets to see, so it can be a high-pressure, high-skill task.

But add to that a timer, a grandstand filled with spectators and a few judges watching your every move – and that pressure can rise to a whole new level.

The 2019 Australian Banana Packing Championship was held in Innisfail over two days in July as part of the annual show.

Ten teams from Innisfail and Tully brought their best to the table – or shed, in this case – vying for prestige, thousands of dollars in prize money and the distinctive banana trophies.

“It’s a bit of friendly fire between Tully and Innisfail,” said organiser Naomi Travers. “It’s a great way to get out there and show our industry for what it is – what we do to get that fruit into a carton and out to the consumer.”

The process will be familiar to many in the industry – teams of two must dehand a bunch and work through the sorting and clustering process before choosing fruit to go into a carton.

Of the ten teams, three make it to the final on Friday night, with first place taking home $1000 each and second place $500 each, thanks to Frank Lowe & Sons.

It was a team from Mackay Farms’ Mullins Road property that took home the coveted banana trophies this year – Scott Solien and Billy Banu – and it’s fair to say they were delighted.

“It was strange competing against my brother this time,” Mr Solien, who has participated in past events, said. “But I chose a very good team mate!”

As anyone within earshot of the Innisfail Showgrounds could tell you, a particular highlight of the event is the backpackers competition, with four teams taking part this year.

“It’s a great atmosphere – everyone comes in to support it and it gets quite noisy!” Ms Travers explained. “It’s just a great night.”

Decked out in banana suits and with some very vocal support from their Backpacker Shack family,