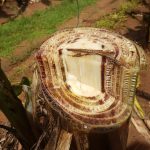 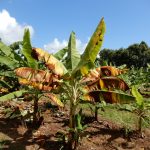 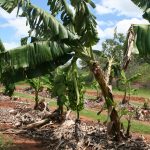 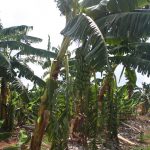 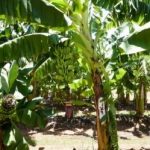 Planted in 2016 as part of the previous Banana Plant Protection Project (BA10020), the varietal screening trial at Coastal Plains Research Farm in the Northern Territory was completed in early 2018.

We collected data on the disease resistance of certain varieties to Fusarium oxysporum f. sp. cubense (Foc) Tropical race 4 (TR4), for the plant crop and a ratoon. The varieties comprised of several Cavendish lines (including Taiwanese GCTCV lines), FHIA hybrid and parental lines. We reported on the results from the plant crop in an earlier edition of Australian Bananas (April 2018). This article is an update on the performance of the first ratoon crop.

As a reminder, symptoms of Panama TR4 infected plants can include:

• Initial leaf yellowing of the oldest leaves, which leads to wilting and subsequent death of the leaves (Figure 1).

• A reddish-brown discolouration of the water-conducting tissues, evident when the pseudostem is cut through (Figure 1).

The trial was planted in June 2016, with all plants artificially inoculated with TR4 colonised millet.

As for the plant crop, we categorised the reactions to TR4 in this manner:

Resistant (R) – No disease symptoms were observed within the crop cycle.

Intermediate (I) – Majority of plants survived, with minimal plants showing symptoms or minor symptoms noted. With the appropriate crop, management or environment to lower the inoculum levels, these should be commercially viable.

Very susceptible (VS) – Plants showed severe symptoms and more than >50% killed due to TR4 infection.

Nine varieties remained resistant to TR4 in ratoon 1, with no external or internal symptoms observed.

About two thirds of the varieties screened in the trial were intermediate in reaction or better in both plant and ratoon crops, with one third of the varieties tested remaining resistant into ratoon 1, which was very encouraging. Three of those varieties – CJ19, GCTCV 215 and 247 (Figure 2) – will be progressed to a pre-commercialisation phase to assess their prospects on commercial properties.

However, none of them yield as well over time compared to Williams grown in the absence of the TR4 pathogen. Additionally, some of these varieties were included for gamma irradiation as part of the mutagenesis program of the BA14014 project, in an attempt to improve their agronomic traits while maintaining TR4 resistance.