A suspected new case of Panama disease tropical race 4 (Panama TR4) has been found on a fourth banana farm in the Tully Valley.

On 4 February, 2020, the grower was advised that a sample of the plant tested positive to the PCR (polymerase chain reaction) test for Panama TR4.

The sample is undergoing confirmatory testing using the VCG test – which is the more detailed vegetative compatibility group. Therefore, it is likely to take several weeks before a conclusive result is known.

“First and foremost, our thoughts are with the grower affected,” Australian Banana Growers’ Council chair Stephen Lowe said. “This is no doubt a challenging time for them and their family, and we will help them through this in any way we can.

“While as an industry we knew this disease would eventually spread, this is still devastating news that no-one wanted to hear.

“The new suspected detection is another reminder that Panama TR4 is here to stay and all growers need to maintain strong biosecurity practices.

“Biosecurity Queensland has a strong surveillance program in place and this has assisted with early detection of the disease in the past, and has again with this latest case.

“It has been an incredible feat that the disease has been contained to such a small area in almost five years. Indeed, this latest case is in close proximity to the other affected farms in Tully. However, there can be no doubt that it is spreading – and sadly it will continue to do so.”

ABGC will keep you informed as new developments happen.

The Coffs Harbour BGA will meet tonight (Feb 5) at the Park Beach Bowls Club, starting with dinner at 5.30pm, followed by the general meeting at 6.45pm.

The next Tweed BGA will be held Wednesday, 26 February, at the Murwillumbah Golf Club, at 6pm for a 6.30pm start.

Banana industry stakeholders are invited to take part in a survey which is being conducted to identify pest and disease priorities.

The survey is part of the Banana Industry Strategic Agrochemical Review Process (SARP) 2020.

Growers can participate in the survey by clicking here

The banana industry SARP was last updated in 2014. The 2020 survey will identify the banana industry’s priorities and provide comment on priority pests, including diseases, insects & weeds.

The survey closes 28 February, 2020. If you have any questions about this survey please contact: Doug McCollum, E: doug@agkservices.com.au 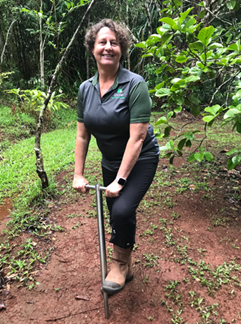 Evizel Seymour has begun her new role with Terrain NRM and will be helping both landholders and groups to adopt innovative and sustainable farm and land management practices, including improved soil health, biodiversity and water quality.

“In this role, I’m a resource hub for new ideas, methods and things like grant applications. I’ll be able to put growers in touch with like-minded growers, refer people to specialists who can help them with new ventures, and let everyone know about workshops and funding opportunities,” Ms Seymour said.

Ms Seymour is already a familiar face in the region, having worked with catchment groups, graziers and other landholders for more than 10 years in Terrain NRM roles.  She also has a background in marine biology and grew up on a wheat and sheep station in central New South Wales.