Skip to content
Home
/
Tom calls it a day 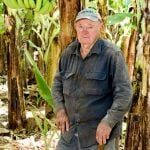 The ABGC Board farewelled retiring West Australian director Tom Day in December last year, with the representation of growers in the far west handed over to incoming director, Doriana Mangili. Following his departure, Mr Day spoke with Australian Bananas Magazine, reflecting on his two stints as a director.

When retiring Australian Banana Growers’ Council director Tom Day bought his banana farm 30 years ago it was a homecoming of sorts.

Mr Day grew up on a banana farm in the Carnarvon region, 900km north of Perth, which was run by his father, who managed the first government research station in Carnarvon, and uncle.

He remembers the early days when his father and uncle cleared the land with an axe and mattock.

“We had to get in there and dig – physically dig rows and flood irrigate. Blokes had horses and they used to do contract ploughing.”

Before Mr Day and wife Margaret began farming, the couple spent time in the transport and fuel industries and owned the popular watering hole, the Tropicana Tavern, at Carnarvon.

When the time came to sell the tavern, Mr Day and Margaret bought an 8-ha farm which they named Eshnadarragh – after Margaret’s hometown in Northern Ireland – on the mighty Gascoyne River.

The couple continued to grow tomatoes for a period, before building the banana crop which produced up to 18,000 boxes of bananas annually off a 4.5ha section.

“We spent 12 months looking around at other options including sheep stations, before we settled on bananas,” Mr Day explained.

“You’ll never make a fortune but bananas have always been reasonable and they grow easy here. I like the lifestyle and being able to live on the farm.”

In December 2019, Mr Day called time on his second, four-year term as a director on the ABGC board – he served from 2005 to 2009 and 2015 to2019 – and reflected on the highlights, challenges and future of one of the industry’s smallest production areas.

He said the whole-of-industry response to the detection of Panama disease tropical race 4 in Australia’s largest growing region, Far North Queensland, was a highlight.

Despite being thousands of kilometres from
the eastern seaboard, Mr Day said Western Australian growers were always warmly received by Queensland.

While WA is home to a small banana production area, Mr Day believes the industry will continue to flourish due to the success of the Sweeter Banana Co-operative, of which he is a founding member.

It was formed in 1993 to develop a recognisable brand.

He said it was an honour to serve the interests of his state’s growers at the national level.

“In Western Australia we don’t have the same problems with pests and diseases as growers in Queensland do, so I was able to look at issues fromthe outside and provide a different perspective,” Mr Day said.

“I always felt respected and that people listened too.”

While there are minimal pests or diseases issues in the west, banana growing on the other side of Australia is not without its challenges.

“There was 400mm of water through the house.

“In 2015, Cyclone Olwyn knocked over the whole property.”

Mr Day has nothing but praise for Doriana Mangili, the director who has been appointed to take his place, and business manager for the Sweeter Banana Co-operative.

While Mr Day, who turns 80 next year, has slowed down considerably, bananas will always remain a huge part of his life.

He oversees operations on two banana farms leased by the Sweeter Banana Co-operative, including his own.

“I only give orders now,” he added, with a wry smile.