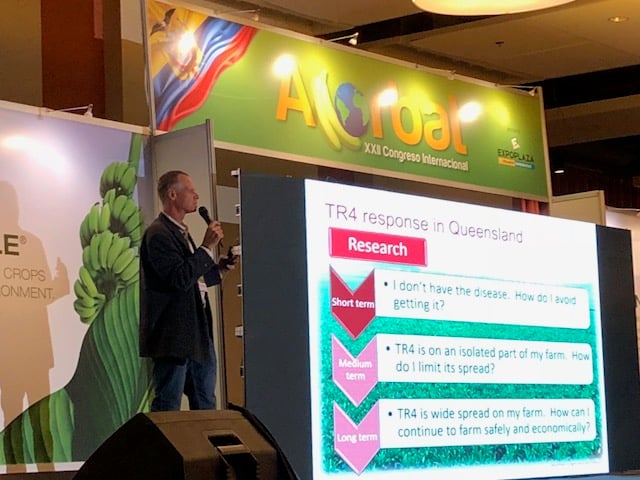 Miami, Florida is better known for its beaches, rather than bananas, but it was the host city for the 22nd ACORBAT Conference from May 2-4, 2018.

ACORBAT is the Association for the Cooperation Of Research in Bananas in the Caribbean and American Tropics, and Ecuador, the world’s largest exporter of bananas growing over 200,000 ha of bananas, was the host nation.

ACORBAT is a forum where the global banana trade can get together to share new ideas and experiences, which attracts over 1000 participants from 22 different nations.

Dr Tony Pattison from the Department of Agriculture and Fisheries, South Johnstone was invited to present on the Australian experience in managing Fusarium wilt (Panama disease) Tropical Race 4 (TR4).

The interest for TR4 management globally has been on resistant varieties. In a forum devoted to TR4, a summary of the current global situation was presented and how other countries like the Philippines and Mozambique, have dealt with the problem.

The ACORBAT conference allowed an opportunity for participants to be updated on issues affecting global banana production such as cultivar development, black sigatoka, rust thrips and climate change.

However, increased knowledge on flower fertility and use of molecular markers meant it was possible to develop improved banana cultivars in only five years.

The breeding process also included input from growers at an early stage.

Other approaches to develop cultivars are also being used around the world.

Rahan Meristem used mutation breeding to develop plants that do not show symptoms to TR4 in glasshouse trials and are currently undergoing field evaluations.

The gene editing approach is being conducted on bananas by groups around the world, but it is unclear whether this is still considered to be genetic modification (GM).

Black sigatoka is out of control in many Central American countries.

With increasing resistance to chemical products, biological products are increasingly being investigated as options within a spray program.

Typically, 50-70 cycles of fungicides are applied per year, but it can be as high as 100 for programs largely relying on biological products.

Thrips are becoming an increasing problem, especially for organic producers and there are limited options for their control.

Options being investigated include plant extracts, like neem, pyrethrums, garlic oil as well as biological organisms.

There is increasing concern in Latin America about the impacts of climate change.

Many banana producing areas have been experiencing climatic extremes like floods, droughts, heat stress and hurricanes.

In the meantime, there is little that growers can be do, other than to develop contingency plans to minimise production losses during climatic extremes.

The aim of the visit was to improve their understanding of on-farm biosecurity and the research being conducted to manage TR4.

Mr Wong also saw how research and development activities around cultivar development, agronomic improvements and improved soil management were addressing many of the problems also being faced by banana growers in Ecuador.

At the end of the visit Mr Wong stated that he was “now hopeful for the future of bananas”.

ACORBAT is held every two years with the next conference being hosted by Colombia.

It is an important opportunity to learn about the innovations being implemented on commercial banana farms and the challenges being faced by the banana industry in different parts of the world.

This project has been funded by Hort Innovation, using the Hort Innovation banana research and development levy, co-investment from Queensland Government and contributions from the Australian Government.

Hort Innovation is the grower-owned, not-for-profit research and development corporation for Australian horticulture.

Dr Tony Pattison is a Principal Nematologist, Soil Health Team Leader, with the Department of Agriculture and Fisheries.