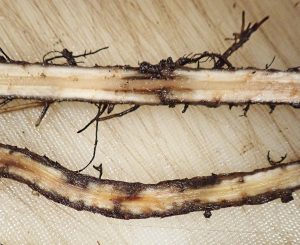 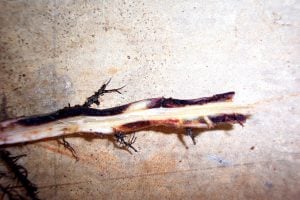 Root damage caused by the burrowing and lesion nematode.

By Jennifer Cobon and Wayne O’Neill

However we suspected that over time that the populations of other nematode species have increased to levels that are now damaging plants.

This activity is part of the Hort Innovation funded project ‘Improved Plant Protection for the Banana Industry’.

In north Queensland, soil and root samples were collected from 38 banana farms in the Lakeland, Atherton Tableland, Tully and Innisfail areas and the plant parasitic nematodes recovered from these samples were identified.

In north Qld, the root-knot nematode (Meloidogyne spp.) and the banana spiral nematode (Helicotylenchus multicinctus) were recovered from 71% and 11% of soil samples respectively with an average of 3,075 banana lesion nematodes per 100 g of root.

The reinform nematode (Rotylenchulus reniformis) was recovered from 68% of farms with an average of 447/100 g soil.

In the subtropical banana producing areas, a total of 63 farms were sampled across the 3 regions; 10 in SEQ, 12 in NSW and 41 in WA. Again plant-parasitic nematodes were identified and quantified from soil samples and root samples taken from each farm.

This nematode was causing significant damage to roots where it was present with the average number of nematodes recovered being 5245 per 100 g roots.

The lesion nematode and the burrowing nematode were both recovered from 30% of farms.

In subtropical New South Wales, the rootknot nematode, the banana spiral nematode and the burrowing nematode were recovered from 83%, 67% and 17% of farms respectively.

This equates to 33% of farms surveyed in NSW having lesion nematodes in soil and/or root samples.

In the Carnarvon area in Western Australia, the banana spiral nematode and the root-knot nematode were found on 100% and 98% of farms surveyed respectively.

With 41 out of 47 farms in the Carnarvon district surveyed, this study shows that both the banana spiral nematode and the root-knot nematode are widespread and abundant and may be impacting bananas production in the area.

This survey of plant-parasitic nematodes in the banana producing regions has determined:

Further research will now be conducted to determine the extent of damage each nematode species causes to bananas under Australian conditions.

The banana industry has been successful in reducing the amount of nematicides used through crop rotation and soil health management.

As there are limited nematicides currently available to the banana industry, effective and sustainable control options forall plant-parasitic nematodes is required.

A long list of non-host crops that can be used in rotation with bananas for the management of the burrowing and root-knot nematodes already exists.

Consequently, the susceptibility of possible rotation crops to the other nematode species identified in this survey will now be assessed so suitable non-host rotations for all nematode pests in Australia can be identified.

It is vital to correctly identify all the nematode pests in your soil – the damage they cause can often look similar.

Once you know your pest, management strategies can be tailored to suit your situation.