Skip to content
Home
/
Slash your costs with home-grown invention 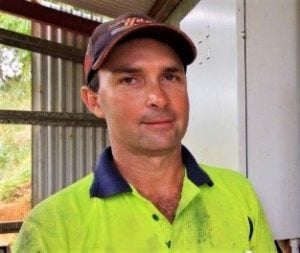 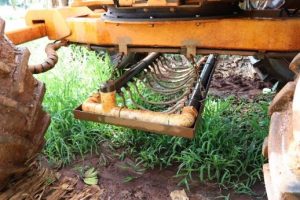 The invention is already used by a handful of other growers.

If time and money are two things you value, a Wet Tropics invention may be right up your alley – or interrow, in this case.

Already used by a handful of other growers, a wick wiper works by directly applying herbicides via a wick or curtain of material that brushes directly against target plants.

The wick or curtain is attached to a frame which is primed from a reservoir of herbicide.

Essentially, it is a simple and inexpensive way to maintain grassed inter-rows and reduce the need for slashing.

“It is quite normal for me to not use a slasher for a couple of months since fitting the wick wiper. It has reduced slashing a lot and it keeps ground cover at a nice height in between. It’s a significant saving,” Mr Rolfe said.

David designed his wick wiper to fit between the axels of his bagging machine.

The PVC pipe (which holds a 50:50 solution of glyphosate at a concentration of 450 g/L) is supported by a frame made of angle iron. The frame is attached to the bagging machine with chains.

David uses hoses and fittings as his wicks, but some growers use old carpet instead.

The height of the wick wiper is set so it targets the taller weeds and grasses, allowing room for the low-growing grasses to flourish. Low-growing ground cover is preferred by growers as it makes access to the blocks much safer and easier.

The majority of growers look after their inter-row ground cover to help reduce sediment loss, which is important for a variety reasons, including reducing the risk of Panama TR4 spreading.

And while it can be a time-consuming task, this North Queensland innovation could make a world of difference.

If you would like more information on wick wipers, please contact the ABGC Reef Extension Team on (07) 4015 2797 or email Sarah Simpson on sarah@abgc.org. au

The Reef Alliance Project is a partnership between agricultural industry, regional NRM bodies and facilitated by the Queensland Farmers Federation (QFF), with a common goal of securing the future of the Great Barrier Reef. The Reef Alliance Program is funded by the Australian Government and delivered through the Reef Trust.