Skip to content
Home
/
TR4 Around the World: Ongoing spread and impact 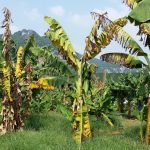 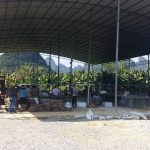 Harvesting, washing and packing in truck in the plantation. 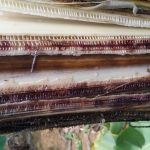 Internal symptoms of TR4 in Cavendish. 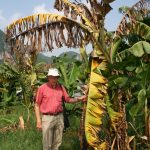 On site in China.

Fusarium wilt TR4 was first identified in Cavendish plantations in Indonesia and Taiwan in the early 1990s. Since then, it has spread across many banana-growing countries.

The initial spread in the 1990s was to China and the Northern Territory of Australia, followed by the Philippines. Other major banana producers in Asia, including India, Pakistan, and Vietnam, have also reported the presence of TR4. Although it was only recently reported in India (2018), it is already present in four different states. Since India is by far the world’s largest banana producer, the impact on food and income security will be huge.

Until a few years ago, the spread was contained to Asia but it has since been found in the Middle East (Oman, 2012; Jordan, 2013; Israel 2016) and it was detected on the African continent in Mozambique in 2014. A large Cavendish based plantation enterprise developed there was declared bankrupt in 2018 due to an inability to keep TR4 under control.

The extreme mobility of TR4 is illustrated by the latest incursion in the United Kingdom. A large tropical glasshouse was built in Cornwall as part of what is called the ‘Eden Project.’ It contained banana varieties including Pisang mas and Cavendish. These bananas recently succumbed to fusarium wilt TR4. This demonstrates that the importation of a wide range of tropical plants to populate this glasshouse most likely led to the introduction of TR4. It seems likely that TR4 is moving in plants and soil widely traded on a global scale in amenity horticulture.

The lesson from this is that although the Australian banana industry has very strict controls concerning the import of plant material of bananas, other pathways outside of our industry exists which may pose significant risks.

The situation in Australia

Australia is about the only country to have mounted a significant effort to contain TR4 and prevent its spread. It has been calculated that the potential impact of unlimited spread of TR4 in Australia would cost $138 million a year industry wide (Cook et al 2015). The impact on regional and rural communities affected will be very high. To get some insight into what may happen if we are not actively trying to reduce the spread of TR4, it is worthwhile looking at how the TR4 situation unfolded in China.

Fusarium wilt TR4 was first identified in Southeast China in 1996, a year before it was detected in the Northern Territory. Over the last 20 years it has spread significantly. It’s estimated that by 2017 over 100,000 ha of Cavendish bananas had been destroyed by TR4. At current market prices, that represents a loss of over 1.4 billion US Dollars.

After TR4 devastated production in the Eastern States, the producers further west stepped up to meet demand. However, in the absence of any biosecurity measures the disease soon caught up with them. Mounting losses in existing plantations led to a frantic search for new clean land. In China, villages own land collectively. Individuals have land contract rights, and only the land-use is transferable for certain amounts of time. This means that a plantation manager is able to lease new land but he does not own the land, which limits his responsibility to invest in infrastructure. There are no packing sheds as harvesting is done by contract crews who pack directly into refrigerated trucks.

Most of the affected land is converted to other horticultural crops such as citrus or dragon fruit.

New land not affected by TR4 is now becoming very scarce in this province and operations are moving further West into the Yunnan province and across the border to Laos and Myanmar. Due to the lack of biosecurity, they are taking the pathogen with them, giving rise to recent first reports of TR4 from these countries. DNA sequence information confirmed that these strains were identical to the ones found in China (Zheng et al 2018). Gros Michel as a ‘yardstick’

To get some insight into the potential global effect of TR4, the past impact of fusarium wilt Race 1 on Gros Michel production can be used as a yardstick.

It’s estimated that the global damage of the fusarium wilt race 1 outbreak – which lead to the demise of that variety – cost about 2.4 billion USD in today’s dollars. Globally the banana industry has grown is four to five times that size and is at present valued at 52 billion USD. A very rough calculation could mean a global damage bill of approximately 10 billion USD from the ongoing spread of TR4.

Clearly, solutions in the form of effective resistance are urgently needed to avoid losses at this scale.