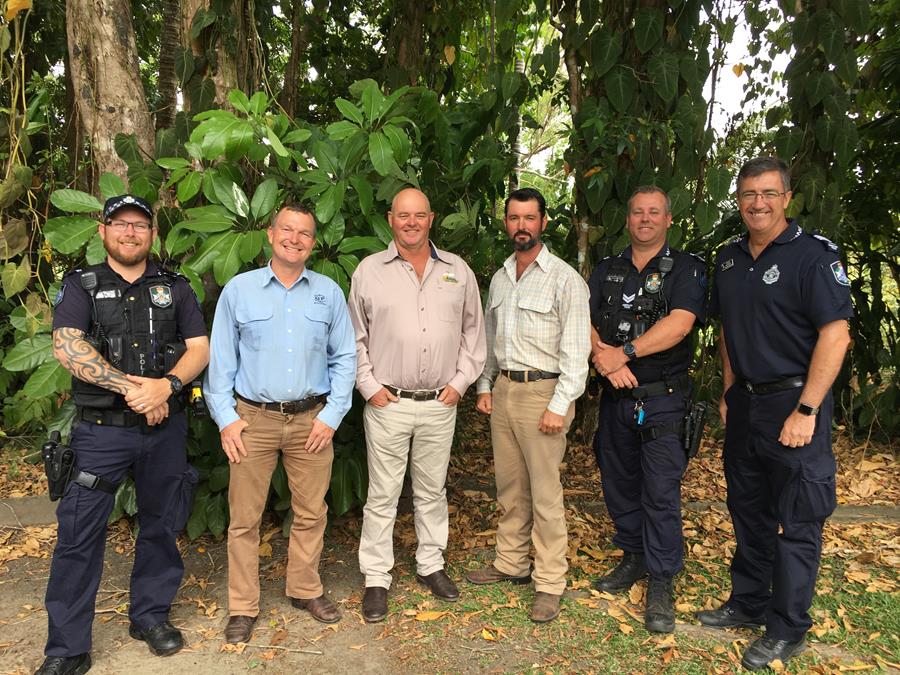 A big thank you to the five Queensland Police Representatives (pictured above with ABGC deputy chair Leon Collins) and Biosecurity Queensland who met with Cassowary Coast growers at South Johnstone last Friday to give advice on prosecuting people who trespass onto their farms.

The meeting was organised by ABGC following recent concerns over an increase in trespassing on banana farms around Innisfail and Tully – including pig hunters and tourists entering properties; as well as other unrelated incidents of theft and wilful damage.

Queensland Police has urged growers to report all incidents of trespass to police, so they can investigate and have the best chance of prosecuting offenders. This information will also allow police to establish whether there are any patterns of illegal activity.

·         To enter private land (including private roads and easements) a person must have permission from the owner. If they don’t, it’s trespass and they can be prosecuted.

·         Having ‘No Trespassing’ or ‘Private Property’ signs helps police prosecute.

·         A landholder has the right to ask a person for their name and address if they are found trespassing on their land.

·         Report ALL incidents/evidence of trespass to police. Big and small (e.g. a photo of a cut fence or a vehicle registration number). Police need to build a picture of what is happening and all pieces of evidence add up. If it is not reported, they can’t investigate and potentially prosecute.

·         All incidents of illegal trespass should be reported directly to your local police station, not Police Link.

·         Signage – If your land is fenced, you don’t generally need ‘No Trespassing’ or ‘Private Property’ signage, as a fence indicates a boundary, and crossing that boundary constitutes trespass. However, where there is no fence, ‘No Trespassing’ or ‘Private Property’ signage should be erected. This is to negate any excuse for someone entering your property without permission. Essentially, the offender cannot use the excuse, ‘I didn’t know this was private land’.

ABGC Deputy Chair Leon Collins has led the management of this serious issue, which poses a real threat of spreading Panama Tropical Race 4. He continues to meet with local authorities such as Cassowary Coast Council and police – and has helped drive home the message to the general public through local media.

At the illegal trespass meeting last Friday, banana growers reported an increased number of tourists entering their properties without permission.

Biosecurity Queensland is keen to deliver an information campaign to educate tourists about Panama disease tropical race 4 (Panama TR4), and the importance of not entering farms without permission.

Tourists may not be familiar with Panama TR4, nor the potential risk they may be creating by entering farms without permission.

Your feedback will help ensure they reach the right people with the right messages.

Growers are reminded that now is the time to get leaf spot under control before the wet season, humidity and hot weather is upon us.

It is much easier to keep inoculum levels low (under the recommended 5%) by making sure your de-leafing is up-to-date and by following the recommended resistance management strategy for spraying.

High levels of leaf spot infection in your plants will cause problems – not just for you, but also your neighbours such as:

Improve production, profit and – of course – sustainability at the Tully Sustainable Farming Day.

The day will feature a range of short talks, including one on feral pigs from ABGC Deputy Chair Leon Collins, an update on nutrient rate trials and grants, displays of new products and door prizes.

Last week on Triple J hosts, Ben and Liam, discussed their love of bananas and how they see Australian Banana marketing ‘all the time’, speculating on who was behind it.

Hort Innovation Marketing sent them an Australian Bananas care package on air, with some extra goodies and a nice letter that included a thank you and some banana jokes. They loved their gift and spoke at length about bananas live on air. You can listen here: Triple J . Also, their Instagram post can be found here: We love bananas and the banana guild are certainly not forcing us to say that

While the focus of inspectors and resources on the ground will be with commercial growers, these social media accounts will allow the team, under Project Leader David Peasley, to educate members of the public.

Have you spotted some strange looking symptoms on your banana plants?

If you suspect you’ve seen a pest or disease of any kind on your farm– there’s one quick number to call.

The Exotic Plant Pest Hotline (1800 084 881) will direct you straight to the relevant biosecurity authority.

As the banana industry knows all too well, pests and diseases move quickly so – if you’re ever suspicious or in doubt – pick up the phone.

A pool of scholarships are currently available for women in the horticulture sector to participate in a range of leadership courses. Expressions of interest close 5pm on November 29th.

The scholarship grants are co-funded by Hort Innovation and Women & Leadership Australia (WLA) and cover almost 60% of the program fee. They are designed for women from all levy-paying horticultural organisations who are emerging leaders, mid-level managers or those with senior/executive level experience.