Matt Weinert, with Golden Dawn’s Paul Gibbins, who he has worked closely with over the past few years, including with packed product and reject analysis. 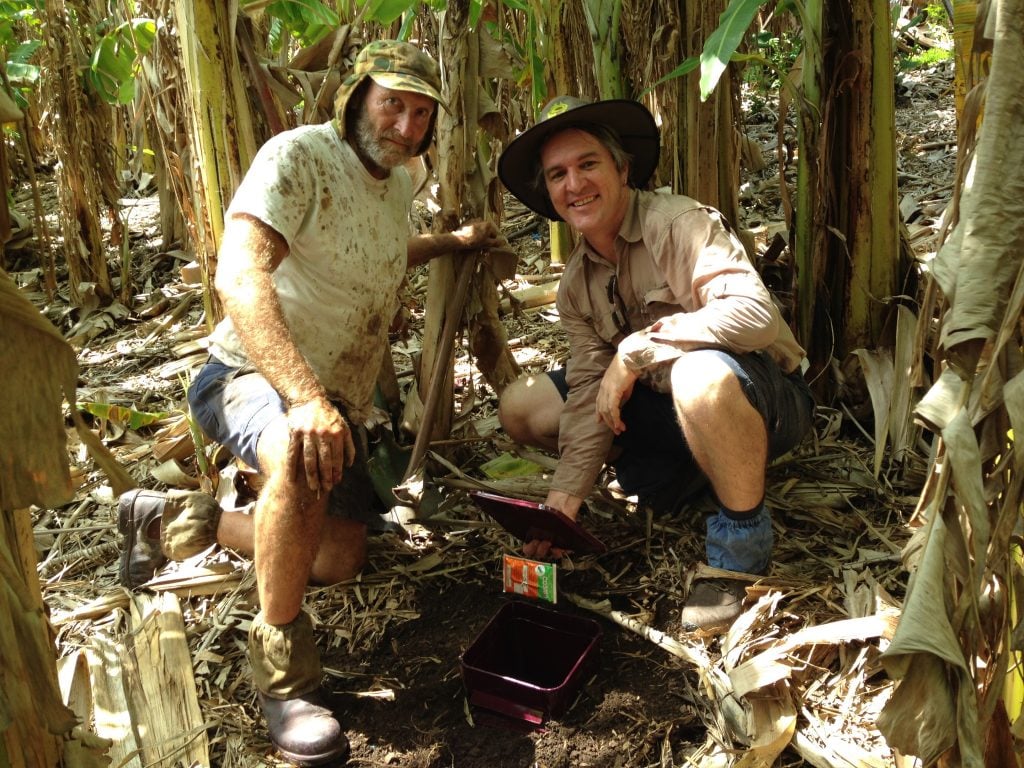 Matt with grower David Tate in the field. Over the past five years, Matt Weinert has publicly declared, on numerous occasions, that he is bananas for bananas. He’s got the shirts and, perhaps more importantly, the industry backing to prove it.

From working one-on-one with growers to harvesting new varieties, from handing out samples at shows to giving public talks and tours – there’s little he hasn’t been up for, to support industry.

Now, though, it’s time for the next challenge. Matt finished his role as NSW DPI Industry Development Officer on November 29.

Reflecting on the past five years, there are a few things that stand out.

The first is that no two days are the same.

“The role has been so varied,” he said. “You can be solving pest and disease problems one day or talking about plant nutrition – something that I’m really passionate about – the next.

“I also spent 5-6 months working with growers across a range of industries on the recovery effort after ex Tropical Cyclone Debbie. I’m pretty pleased with the outcome we achieved there. We got growers some money from the Government to pay for things like infrastructure and fertilizer to get them back on their feet.”

More recently, he had conducted detailed reject and packed product analysis, with the aim of improving the quality of fruit coming out the NSW region.

The second thing that stands out is perhaps the one he’ll miss the most – interacting with growers, particularly the next generation.

“Watching some of them grow over the last 4-5 years has been great. I’m really chuffed about what we’ve achieved with the Tweed BGA, for example. There are young guys there, running the BGA and doing a fantastic job with the local show.

“I’ve only played a small role in that, but I’ve supported them where I can and it’s been fantastic to see it happen.”

It seems the feeling is mutual, with Tweed BGA president Colin Singh noting how much he will be missed.

“He’s organised so much for us,” Mr Singh said.

He acknowledged the fantastic support he’d received from industry, including the Australian Banana Growers’ Council board and staff.

ABGC CEO Jim Pekin said Mr Weinert had made a real impact during his five years in the role.

“We’ve been lucky to have someone so passionateabout the industry working on the ground,” Mr Pekin said.

“No matter how busy he has been, he’s always been happy to pick up the phone, help out a grower or showcase the industry to a broader audience.”

While Mr Weinert is disappointed he’ll no longer have first access to the high-quality fruit produced on the Duranbah trial block, he believes the future is looking good for the NSW industry.

Not only are there new plantings going in, but there’s demand for the state’s fruit both locally and in capital cities.

He’s also proud of the fact that the banana weevil lure is commercially available, predicting pheromones will be a key pest management strategy into the future.

“I know some people had trialed it before I came on board, but we had fantastic support from Bugs for Bugs and we’ve done some interesting trial work… we just need to fully work out the trapping strategy and hopefully that can continue after I’m gone.”

While Matt may be moving into a nuttier role now (he’ll be working with macadamias), he knows from past experience that it’s not farewell for good.

“I’m still in contact with mango, avocado and citrus growers that I worked with on the Atherton Tablelands prior to my job in bananas. I still get some phone calls from them,” he said.

“It might not be day-to-day, but I’ll still have an interest and keep across what’s happening.”