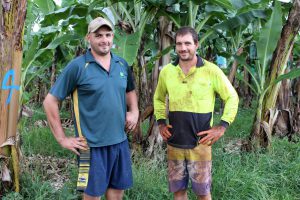 Banana farming brothers Matt and Ben Abbott, of Rabbits Organics, will use funding received in the latest round of Reef Trust grants to trial an under-tree slasher, that has never previously been used in the banana industry.

The slasher is fitted with a pivoting head, which will move in and out from a sensing arm between the banana trees to help maintain full groundcover vegetation over the entire paddock.

“The slasher is out of a vineyard application, they use it to mow in between the grapevines, but we are going to make it work with bananas,” Ben Abbott said.

“We mow the inter-row now, but we want to mow between the trees as well and the slasher will allow us to do both in one pass, to maintain vegetation around the banana trees in addition to the inter-row,” he said.

“We already match nutrient demand to crop use so this is a further measure to improve water quality leaving our farm.  Water quality off-farm will be further improved by maintaining vegetation on the row space, in addition to the inter-row.”

·         Halve the passes per inter-row, which will help reduce sediment loss, compaction and therefore reduce the impact on the off-farm environment.

Matt Abbott said assistance available under the Reef Trust program was invaluable to growers who were constantly searching for ways to improve practices which reduce sediment and nutrient run-off.

Previously, the Abbott’s have used Federal Government reef grant funding to purchase an automated fertigation system, to better control their nutrient application on their other, nearby banana property, at Mena Creek.

“The big thing with the grants is they allow growers to change on-farm practices that improve water quality, where costs are prohibitive,” Matt Abbott said.

“Everybody wants to make improvements to their practices, but because of the costs generally associated with it, they may not necessarily do it. So the funding makes it affordable.”